It is not clear to me whether sellers are getting more money for their old houses with wall insulation. I doubt that they are. Buyers who value sustainability lean towards new construction, which will be much better than even the best retrofit of an old house. But, insulation is not that expensive because of MassSave programs that are still in effect. There are good reasons to beef up the insulation in most houses in our area.

I had cellulose blown into the walls of my house in 2012. This is our third winter of enjoying the difference. My house is less drafty, especially around the baseboards, and it is more sound-proof. 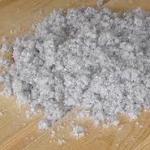 Cellulose insulation is made of old newspapers which have been treated so they can go in the walls and not catch fire like crazy. In most cases, exterior wall insulation is blown in from the outside.

I saw a house with Hardie Board that had to be done from the inside. (I think it would sustain too much damage, so it was better to damage and repaint the interior.) I considered insulating the ceiling and floor between me and the tenants, but decided to do it another time. If you insulate between the floors, it is done from the inside, too.

The cellulose is blown in through holes about the size of a vacuum cleaner hose. My house took five days. They also did air sealing around the perimeter of the basement and added a big mushroom vent on the roof.

We had some problems. Some were man-made and some were caused by the house structure:

Problem 1: This was user error. At the start and the finish, they air-tested the house. This involves closing the house up and using a high-powered exhaust fan to see where the air is getting in. When they did this, they blocked the cat-door which leads to the back hall where the litter box is. They forgot to unblock it. We didn’t notice until it was too late. (My cat tried to tell me!) Extra laundry was the result.

Problem 2: This was also user error. They turned all the gas-fired appliances  on full blast (heat, hot water, stoves, and dryers) and ran all the exhaust fans in the house. This was to insure that the gas-fired appliances were safe to run. They forgot to turn the hot water heaters back down to normal. Ouch! I found out when the shower was really hot. I thought the insulation was a miracle. I went to turn it down a notch and found it at the tippy top. In actuality, it made no difference to the hot water temperature. (I have pipe insulation that pre-dates this project.) 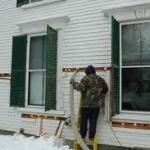 Problem 3: This was the house’s fault. I have the worst kind of house for exterior wall insulation. My house has aluminum siding. To do this work from the outside, the guys had to remove a course of siding, cut holes in the clapboard beneath, blow the insulation in, reseal the holes, and replace the aluminum. It takes practice to remove and replace aluminum and some of the contractors hate working with it.

In contrast, vinyl siding snaps on and off more easily than aluminum. Cedar shingle or clapboard is even easier to remove and replace. By day two, they dubbed my house a “house from Hell.”

Problem 4: This was also the house’s fault. There was an abandoned furnace-air return duct that was open to the wall cavity. When the insulation was blown in, the return duct grate in the bathroom popped out. They had to open the main return duct to insure that the (now full) duct was no longer attached to the second floor furnace system (it wasn’t.)