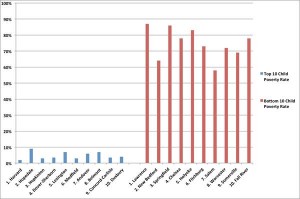 There are two factors:

Paul Reville, former Secretary of Education for Massachusetts, wrote in Education Week in June 2013: “We were going to eliminate the correlation between zip codes and educational achievement and attainment. I’m sorry to say that, two decades later, it is clear that we’ve failed.”

My state Senator, Pat Jehlen, published a newsletter about the minimum wage and education. Chart above was developed by her staff. There are more interesting charts on the newsletter link.