Inspection problems: when to run away!

Inspection problems: when to run away!

Today, the problems I am discussing are not finite; but “infinite” is not the right term.

Really infinite: A problem is not infinite if the house could be torn down and rebuilt. (Many can be, but you probably don’t want to.)

Infinite problems are the rare houses that never should have been built. They cannot be leveled and another house put on that lot. Either the lot is too small to build on by current standards, or the land is not fit to hold a house. I have seen both. They have an infinite problem. I’ll tell you about some of those on another day.

Not finite problems are harder to work with than finite ones. Some signal the call “Run Away! Run Away!” Some can be managed, if the house is worth it in other ways. The general warning sign for this kind of problem is when a contractor says something like this, “I won’t know how bad it is until I get in there.” Sometimes you can get a worst-case scenario like “If I have to redo the whole thing, it will be $15,000.” Sometimes you can’t get that because it has to do with labor time that is too hard to predict

1.      Run away if the worst-case is overwhelmingly high.

2.      Run away from not finite problems that have no worst-case estimate.

So what problems are not finite?

Interior water damage: When water runs through interior walls, you cannot know what is going on behind the plaster in the wall until you open the wall. If the wallboard is all that got wet, the repair is simple. If the wiring is damaged, caa-ching.  If supporting wood members are damaged, more money. If there is a slow plumbing leak that has gotten moldy in there, double caa-ching. The extent of the economic hit varies wildly. In general, unless it is a tiny area, I hear the call of “run away!” 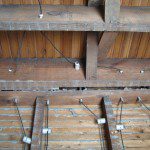 Electrical repair: If the wire replacement is a safety issue, like the presence of knob and tube, that can signal that call, “run away!” If there is knob and tube in a house you are thinking of buying, find out the extent of it before deciding whether to do ahead.

The same is so for any antiquated wiring. Adding outlets can run more money than you may think. Electricians spend a lot of time snaking wires through walls and you pay for it. However, you can do that work over time, if it is not a safety issue. But, if the problem is pandemic in the house – every outlet is ungrounded and every overhead lighting fixture has no switch – the “run away!” rule applies.

Antiquated plumbing: Replacing brass piping throughout a house is a major undertaking with unknowns along the way. If you see a house that still has brass plumbing, it could be a “run away!” depending on the extent of it. Anything that runs through the walls takes time (and your money) to replace. Snags happen, and they will cost you. Plumbing that is all in an unfinished basement is much easier to handle.

I cannot think about expression “run away” without thinking of Brave Sir Robin or the Killer Rabbit  from Monty Python’s Holy Grail.