This was the “Thanksgiving of the mouse.” Two out of three of the households we visited had uninvited squatters of the rodent variety.

I ended up being the hero this week. My niece, who is a tall, strong woman turns into a ten-year-old at the thought of a mouse. Well, not entirely. The day before we arrived, she managed to trap a mouse in a bowl. She set out some traps. Then she left the mouse for her husband to take away. (He went to a field away from the house and let the rodent loose.)

My niece thought that might give her good mouse-karma. I told her to think again. On Sunday, she found a mouse in a trap and scheduled the exterminator. Enter the Hero, Aunt Rona! I took the poor creature out to the garbage. The exterminator will take it from there.

My niece was lucky: she found mice very early in the infestation. They were only in the garage and the boiler room (in the basement). The exterminator determined that they had just started to nest in her house.

If you ignore one mouse, there will be even more. If you think mice are cute, think again. One may be cute, even two of three. (Although my niece would beg to differ!)

Cute or not, mice reproduce at a rate of 5-10 litters a year with an average of 6-8 little ones per litter. Getting rid of mice early is the most humane thing to do. Once they nest happily in your house, you will need to kill many more. 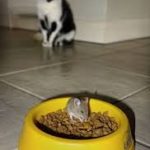 The second family household had a resident mouse-prevention system. Domestic cats are not always good mousers, but our sister-in-law has a mouser-in-residence. Then the problem is that you have to clean up the remains.

Exterminators say that the presence of a cat does not deter mice. The wild mice have figured out that domestic cats do not pose a threat to them, if the cat is not the mousing-type. I don’t know how they know–the exterminators, or the mice.

The good news is that it is fairly easy to efficiently get rid of mice with traps. Most people do not hire an exterminator. Some traps are more humane than others. Here is a site that shows you the options.

When I am with buyers in a house, I point out mouse traps or what is euphemistically called “mouse dirt” or “mouse droppings” in basements, garages, and attics. The little furry guys like to nest in fiberglass insulation. (You’d think they’d get itchy from it.) When I see the little tunnels in the insulation, I point it out.

I mention  mouse-prevention measures in houses, too. Sometimes I still see the steel wool fix under sinks or in corners near where heating pipes come up. Steel wool is an old-fashioned way to block mouse entryways. (My father used it when we were kids. We had mice two or three times that I remember.)

I frequently run into buyers who cannot abide mice. Just the thought that a house may have mice is enough to send them scurrying away. (The people, not the mice.)