What do you do if you have radon above the action level of 4.0 pci/l? What does it cost to make your house safe?
There are tried and true cures for that problem. To mitigate for Radon, a system is installed that creates a slight vacuum under the basement slab.  This keeps the radioactive gas from entering your home and collecting there. The air passes through a PVC pipe, using a fan, and is discharged above the roof line. The system looks like this.
Generally, it takes about half a day to install and the cost is almost always less than $2000 and often less than $1000. (My most recent client paid $975.) Things that make it more costly are installation problems in mitigating rooms with no basement beneath or if the installer has to work around rock ledge immediately under the basement floor. 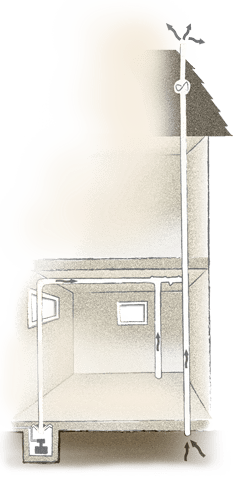 In older houses two PVC pipes are used, since there is dirt or sand under the basement slab. In new construction, one pipe is enough because there is gravel under the slab and air moves more freely.
Fans come in different sizes and strengths. The technician will determine what you need. Fans are generally come with a 5 year warranty. They generally last about 12 years. Replacement is about $300-400.
Whether the fan and pipe are inside or outside is a matter of taste and preference. The fans last slightly longer if they are installed outside, because attics get very hot and that is hard on the fan mechanism. The difference is not striking.
Some people prefer to install the pipe and fan through the inside of the house, so that it isn’t ugly outside. In interior installations, there needs to be places to run the pipe from the basement to the roof without being ugly in the house. The fan is installed on the pipe in the attic area. If you have closets in a row on the main level and upper levels, this works easily. Otherwise, the pipe will go up in a corner and the technicians will build a box around it.
If you have a place where the white pipe and fan will not be visually bothersome, like behind a chimney on the side of the house, the outdoor option works well.
Once your system is in place, it is tested. The installers will guaranty that the levels will remain below 4.0pci/l as long as the fan is operating. It is obvious with a glace whether the fan is working, just check the gauge on the pipe every month or so. It is recommended that you retest every two years.
Here’s a video showing you what a system should look like. (link)
So, if your home inspector tells you that the house you want to buy has a Radon problem, don’t panic. It is a relatively easy fix with a finite cost.
By Rona|2021-11-01T16:50:21-04:00August 16th, 2017|Categories: Health and safety, Problems and repair|