Why is it built this way?

Why is it built this way?

I’m curious about houses. Wherever I go, I wonder why they are built the way they are. I can’t turn off my inner house-nerd, even when I go on vacation. You can call this post: “House nerd on vacation.”

Almost as soon as I arrived in Key West, I noticed that all the roofs were metal. No asphalt, no slate, a handful with tarps because I was there shortly after Hurricane Irma. My inner house-nerd wondered: is this a southern thing? You know, hot tin roof and all. Over the next couple of days, I noticed it consistently on fancy places and little ordinary places; they all had similar silver-colored metal roofs. My theory was that it was better in a hurricane. That wasn’t the whole story. On the second to last day, I found out that it was a fire code that all roofs in the historic district be metal. Any replaced roof was replaced with metal, until they were all metal. A little research also told me that the metal does fare better in a hurricane, too.

Other tidbits: in a subtropical climate, the lighter color is much better for heat control. Is solar power compatible with metal roofing? Seeing is believing; yes it is! 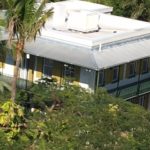 The Hemingway house was in 1851 for Asa Tift, who a wrecker. This house has stone walls and was built near the highest point of land on the island (16 feet above sea level.) It has a basement, which is an oddity for Key West. Not only were basements an anomaly, in-ground pools are ridiculously expensive. The Hemingways moved there in 1931. Mrs. Hemingway had one installed at a cost of about 2.5 times the value of the entire house.

Also, on that second-to-last day, l was told about foundations. The answer, none. Houses are built above grade. Builders do not dig into the rock. They build above it, so floodwaters can go underneath the house. Here’s a summary.

Fire: Boston and the near-in cities have neighborhoods that are densely packed. We mostly have wood-framed houses, like Key West does. It is not unusual for house fires to spread to the next door neighbor’s house. Has anyone studied whether metal roofing would deter the kinds of neighborhood fires we have here?

Flood: We’re on the coast. The Seaport area, Aquarium MBTA, parts of Dorchester, and residences in coastal cities and towns in eastern Massachusetts and on the Cape and Islands flooded in the snowstorm on January 4, 2018.

Much of this is old construction. You can bet the electric service box and heating systems are in the basements of older houses on the coasts. In businesses, many of the parking garages and of course the MBTA stations, are below ground. So how is Boston building these days? I found the report, but also a swanky little summary from a Seaport hotel.

Building resilient buildings and changing existing buildings when they are renovated seems to be the best way to go. But, is it feasible? How high is your neighborhood above sea level? To see elevation by address, click here.

This house-nerd is no longer on vacation.