A house hunter asked me,

….I wanted to ask your opinion… about something I saw recently. So if you saw a building with a basement ceiling like this, what would you think? 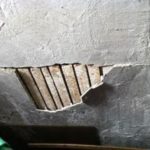 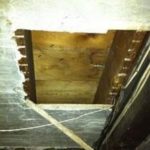 Basements used to all have to have plaster ceilings, for fire prevention. That regulation was abandoned as different fire safety requirements replaced it. What you are seeing is old, aging plaster. Over time, the plaster dries out and gravity pulls it off the lath that it was attached to. Or, someone is doing work on the plumbing above that ceiling, and they remove the ceiling. It looks like a bit of both in that basement.

If you look carefully at the first two pictures, you can see plaster between the laths in a couple of spots. (A lath is a thin narrow strip of wood nailed to rafters, joists, or studding as a groundwork for slates, tiles, or plaster.)  When the ceiling was installed, the ceiling would have all the space between the laths filled with plaster.

In the third photo, someone deliberately cut the plaster ceiling, lath and all, to get to the flooring above. The wood there looks replaced. So, I suspect there was a repair done here.

Summary: Basement ceilings often look awful. They will drop plaster dust on things in the basement. It is ugly, but it is not a structural problem.

What about ceilings upstairs? Will they eventually look that bad?

Upstairs — where it matters — the first sign of the plaster drying out and pulling away from the lath will be cracks in the ceiling. If you ignore it, bulges develop. Eventually, the bulges let go and drop plaster into the room.

It takes years for cracks to develop. It takes more years for cracks to start to bulge downward. Once you have noticeable bulges, the ceiling section may fall at any time. (A truck going by, or a vibration from the heating system or dishwasher, or a child jumping around can be enough to signal an avalanche of plaster.)

If cracks are developing in your plaster ceiling, you can install a “ceiling button.” This is a little disc with a screw. Once screwed in, the disc holds the plaster against the lath. You install some buttons, you smooth the surface by putting a thin layer of joint compound on it. Then repaint the ceiling. This will prevent bulging in that part of the ceiling. Video of ceiling button installation.

If the whole ceiling is pulling away, then you need to tear it down and re-plaster it. This process is called “skim coating.” Here is a video about skim coating.

Do not tear down a popcorn ceiling! Many of them have asbestos in the plaster. Don’t sand them, either. You need to skim coat them, or cover them with sheet rock.

Have you been staring at the ceiling in 2020? See some cracks? Then 2021 is the year to button them up, before they get worse.