Heating Season and Your Chimney

Heating Season and Your Chimney 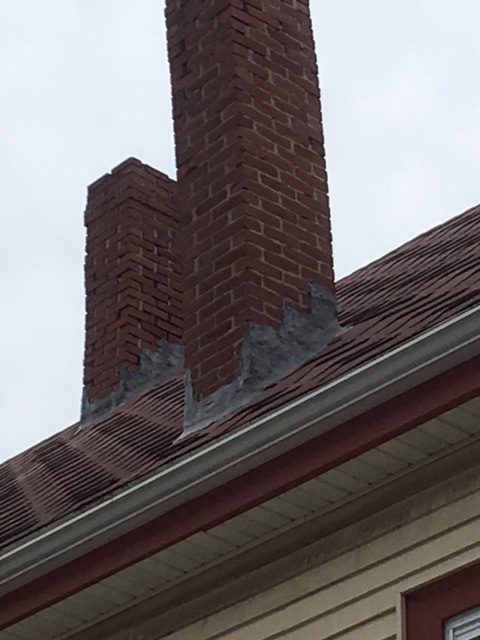 These chimneys are typical of residential chimneys that are more than 50 years old.  Both need re-pointing. The one in front is beginning to twist and bend; it could start dropping bricks soon. The other one also has gaps that are easily visible. Unfortunately, chimneys like this are sort of typical around here.

There are two layers of brick in those chimneys. Most chimneys from before 1960 were built without a clay or steel liner. The air went up along the inside wall of brick. The mortar between the bricks corrodes on the outside by exposure to temperature changes and wetness. The mortar on the inside corrodes for the same reasons, plus from exposure to the chemicals in the smoke coming up.

On a chimney, if mortar washes away enough to make a brick loose, it can fall off the roof or into the chimney. Either is bad news. A falling brick can damage the neighbor’s house or hurt a person or animal in its path. A brick that falls into a chimney can block the flue and cause smoke and carbon monoxide to get into your basement. If you are home when a brick falls in, you’ll hear it. Otherwise, you’ll hear your CO detector. 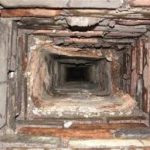 Chimneys, by modern standards, are supposed to be lined. This prevents the possibility of smoke getting into the house if the chimney is blocked at the top. Chimney insides can get pretty grubby.

Chimneys are generally ignored by home owners until something happens. That something is either a falling brick or a dead boiler or furnace. Replacing your boiler will trigger a home owner to bring their chimney up to code. When home owners add the cost of lining a chimney to the cost of replacing their boiler or furnace, many are opting for more efficient direct vent boilers and furnaces. The more efficient systems have less heat going up the chimney or out the vent. Because of that, they can be vented out using PVC piping, because it’s not so hot that it will melt.

House hunters, when you look at chimneys, don’t expect that there’s a fireplace. Most chimneys were built to vent heating systems. When you see the chimney, look for a liner. If it is clay, you’ll see it sticking out. If it is metal, you can’t see it. If the chimney is venting the heating system, and there is no liner, your next boiler or furnace is likely to be a high efficiency model.