One of my clients is buying a house with a fuse box. Yes. A. fuse. box. OMG that’s awful! No, not really.

Fuse boxes are not inherently dangerous. They are just outdated. I used to see fuse boxes more often, but they have slowly gone the way of the dinosaur and been replaced by circuit breakers. 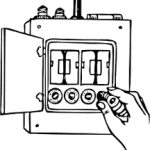 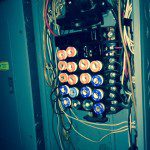 The inside of the box looks just like the inside of a circuit breaker box. The only difference is how the circuit is turned off when there is an overload that makes the wires too hot.

Fuses are designed to melt easily when too much current passes through them. If the fuse is exposed to too much current, the fuse will melt and shut off the power. A circuit breaker will click off when it is overloaded.

How do these systems fail?

Circuit breakers can get rusted or corroded and get stuck in the on position. That’s why circuit breaker panels in damp areas, like the garage, should be turned off and back on regularly.

The metal in the fuse will always melt at its melting point. But fuses got a bad name because of user error. Old-fashioned fuses all had the same base size. It was easy to put a 20 amp fuse in a 15 amp circuit.  Doing that stops the circuit from blowing; but it did not protect the circuit from overheating.

The fuse design changed so that it was impossible to put that 20 amp fuse in a 15 amp circuit because the hole for installing the fuses were sized to only accept the right size fuse. Tamper-proof fuses have a base sized for the correct size circuit. 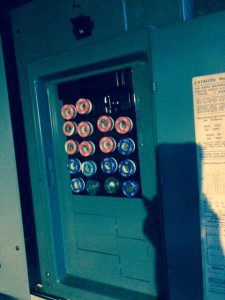 So, back to my client’s house. Their box was properly wired and poses no danger to their safety. Their fuse box was a combination of regular fuses (the clear glass ones in the bottom row, middle) and the tamper-proof kind (the orange and blue ones.)

If my clients were to leave this fuse box in place, they should upgrade the glass fuses to tamper proof fuse receptacles. They also should lay in a supply of fuses, in case they blow some. Until they change the glass ones, they need to be mindful not to over-fuse a circuit. But, like most people, they are likely to switch out to circuit breakers the next time they have a project that involves their electric service.