Home inspection experience of the year

Home inspection experience of the year

This is one of my favorite home inspector experiences of the year. 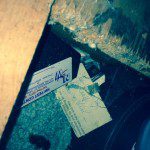 It started at the house visit. At that tour, there was an insulation that looked different than I am used to. My client was concerned that it was vermiculite. I didn’t think so. I’ve seen vermiculite and it is more rock-like than this. This insulation was soft. (More about home insulation.) I took a picture and asked Kevin Morrison, of Morrison Home Inspection.

When I took the picture, I noticed that there was a mouse-trap in the space and also a brown blob. I was concerned that the brown blob was scat* from a small mammal. (It was too big to be mouse dirt.*)

Kevin said the insulation was rockwool.

After some back-and-forth, these clients had their offer accepted and Kevin did the home inspection. 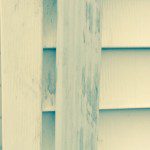 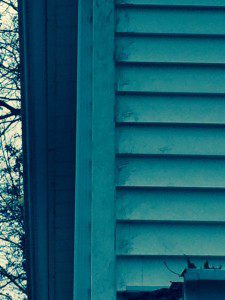 The inspection started outside. Kevin saw this. Do you know what those grey marks are from? Right. That’s a raccoon trail. A raccoon is going up to the roof. If you look closely at the photo on the right, you can see paw prints on the horizontal part of the siding.

I didn’t mention the possible scat again until we got to the attic. Kevin informed us that raccoon scat looks like the unburned end of a cigar. So did this. Eww. Then, Kevin looked for ways a raccoon can get into the attic. Nothing. No holes big enough for a squirrel, let alone a raccoon. So, what is it? I pulled it out of its place to get a better look: 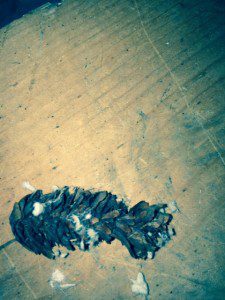 Now we knew the raccoon was not nesting in the unfinished attic. Where was the raccoon going? 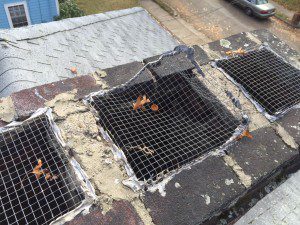 The chimney. Kevin climbed up there an took this picture for us. Those chimney screens have to go. They can get covered with leaves and debris or a bird nest and block the heater and chimney flues. But look! the one in the middle has been pulled up. I’ll give you two guesses about who did that. It wasn’t Kevin. It was Rocky.

*don’t you just love all the euphemisms for feces?