How did the appraisal process get this way?

How did the appraisal process get this way?

Appraisals were very big news in the last real estate bubble. In that bubble, inaccurate and fraudulent appraisals led to lenders giving money based on insufficient — and sometimes non-existent — properties. As the bubble blew apart, stories of mortgages on burned-out or torn down properties emerged. This was not the norm, but there was some very shady things going on. The problem was the appraisers were chosen by the mortgage originators and sometimes real estate agents, who had a vested interest in closing the loan or sale (since they are paid a commission on closed loans and sales.) If an appraiser is dependent on the loan originators or real estate agents for the work, the appraiser is stuck between a rock and a hard place. The appraisers work for the lender, but got assignments from people vested in getting the mortgage closed. If an appraiser failed too many appraisals, his or her work could dry up. Some became corrupt, some refused. Since then, there have been sweeping reforms of the appraisal process. 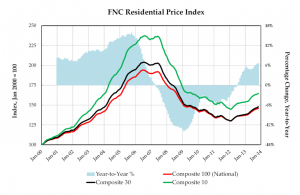 Appraisers caught flak from both sides as prices rose. Both sides? The buyer and seller and mortgage originator are on the same side here. The other side is the lender itself. The lender does not want to lend on a property that is not worth the collateral. Everyone else wants the deal to go through. Separating the hiring of an appraiser from someone who can blackball him or her for undervaluing a property was a good idea. That was a big part of appraisal reform.

When I refinanced, I asked the appraiser about his work life. What he told me speaks to good appraising going on. He said the lenders will ask about why he chose the comparable properties he chose. He is asked to add more choices by lenders. He is given “comps” by agents that are helpful. He is given “comps” by agents that are ridiculous. He said something like this: “When an agent gives me comparable property sheets that don’t match the subject property, it proves to me that they know the sale is overpriced. So, the incorrect comps do not influence my decisions.”

When a house is being sold or refinanced, the lender is agreeing to take a property as collateral for a mortgage amount. The lender then sends an appraiser to check that the property is a good investment for the lender. Everyone involved in buying or selling this property want the appraisal to come in with an acceptable value for the lender: The buyer gets to buy; the buyer’s agent gets paid; the seller wants to sell; the seller’s agent gets paid; the lender’s originator wants the loan to close so he or she can get paid. However, it is not good for the lender to lend on insufficient collateral, so the lender’s underwriter works to protect the lender from that. The underwriter’s decision is based partly on the report from the appraiser.

The appraiser is supposed to be objective. So when the value is not sufficient, he or she will tell the lender. Then the underwriter will stop the loan. That disappoints a lot of people. But that is the appraiser’s job and the underwriter’s job. Sometimes, the mortgage can proceed if the buyers can increase their equity in the property, thus reducing the lender’s financial exposure.

The way an appraisal is done is by looking at recent sales. When the market is going up, appraisals will fail. New purchases, at five or so percent above the prices from the year before, are compared to the lower sales from before the price jump. An appraiser could report a value that is five percent too low. If the buyer does not have equity in the property (in the form or a down payment), the underwriter will recommend not giving the buyer a mortgage. No sale for the buyers, sellers, their agents and the mortgage originator (who gets paid commission on the loan in most cases.)