Chimneys get no love. In the cities, they hardly get any attention, since they are hard to see. They sit up there, in all kinds of weather, in wind and rain and freezing.

The most short-lived part of a chimney is where it attaches to the roof. When the roof is replaced, every twenty years or so, a new flashing is installed to keep the water from flowing down the outside of the chimney and making its way under the roof shingle.

A flashing is a metal sheet that directs the water away from the gap where the chimney goes through the roof. Over time, that metal expands when it’s hot, contracts when it’s cold, and the metal finally cracks. This causes a leak around the chimney. It is either fixed by installing a new metal flashing, or tar is painted on top of the metal to seal up the little cracks. The tar fix will last two to five, or so, years. By then, maybe, you need a new roof and get a new flashing. 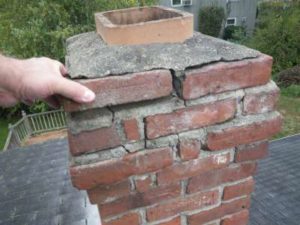 There are two layers of brick in residential chimneys. Most chimneys from before 1960 were built without a clay or steel liner. The air went up along the inside wall of brick. The mortar between the bricks corrodes on the outside by exposure to temperature changes and wetness. The mortar on the inside corrodes for the same reasons, plus from exposure to the chemicals in the smoke coming up.

Failed mortar, over time, can allow a brick to get loose. The brick can fall off the roof or into the chimney. Either is bad news. A falling brick can damage the neighbor’s house or hurt a person or animal in its path. A brick that falls into a chimney can block the flue and cause smoke and carbon monoxide to get into your basement. If you are home when a brick falls in, you’ll hear it. Otherwise, you’ll hear your CO detector when you get home. 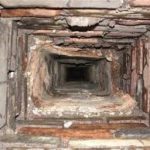 Chimneys, by modern standards, are supposed to be lined. This prevents the possibility of smoke getting into the house if the chimney is blocked at the top or by a brick that has fallen in. Chimney insides can get pretty grubby.

House hunters, when you look at chimneys, don’t expect that there’s a fireplace. Most chimneys were built to vent heating systems. When you see the chimney, look for a liner. If it is clay, you’ll see it sticking out. If it is metal, you can’t see it. Also look for white pipes coming out of the basement. This would mean that the chimneys are no longer in use, and you have high-efficiency heating systems.

Don’t be concerned about brick deterioration. They live longer than we do, up on the roof, where they can dry out after every storm. Your basement bricks have a much harder live. But that is a story for another blog.

This is pretty normal:

These chimneys are typical of residential chimneys that are more than 50 years old.  Both need re-pointing. The one in front is beginning to twist and bend; it could start dropping bricks soon. The other one also has gaps that are easily visible. Unfortunately, chimneys like this are sort of typical around here.

Chimneys are generally ignored by homeowners until something happens. That something is either a falling brick or a dead boiler or furnace. Replacing a boiler will trigger a homeowner to bring their chimney up to code.

When homeowners add the cost of lining a chimney to the cost of replacing their boiler or furnace, many are opting for more efficient direct vent boilers and furnaces. The more efficient systems bypass the chimneys, so no liner is needed. With high-efficiency boilers and furnaces, there is less heat going out the vent. Because of that, they can be vented out using PVC piping, because it’s not so hot that it will melt.