It is a mistake to think that a newly built house is a perfect house. There are some houses that should never be built. They are too close to high ground water. They are on peat, clay, or other unstable soil. These houses have chronic problems with water or foundation cracks.

The biggest problem with brand new is that you won’t see the problems until it is too late. Houses start out perfect, but big problems show themselves in the first few years. They might develop foundation cracks, then settle or leak. If you buy a house right after it was built, you cannot know whether it will settle.

Some years back, clients of mine found a house they loved. It was about ten years old. It had the room configuration they wanted. It was a good location for their commute. It was in a good school district for their needs. They were in love, until we reached the basement. 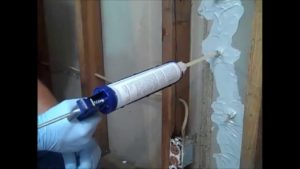 The place had a large, unfinished basement with a poured concrete foundation. There were several areas where the concrete was cracked and filled. The listing agent shared a report that said the cracks were no big deal. One or two of the cracks were filled with silicone injection. Others were too small to need that (at the present time.) This house did not show signs that water was getting into the basement.

I told my clients to move on; buy a different house. But, they were smitten with this one. They hired a home inspector who had an engineering background. They also hired an engineer to do a structural report. The result: a split opinion. Both agreed that the foundation would keep cracking.

The home inspector said that there are cracks, but after ten years, there was not appreciable settling. The homeowner needed to plan on maintaining cracks. When the cracks get large enough, fill them with injected silicone. They could shore-up the foundation, but that would be expensive.

The structural engineer said there were cracks. There would be more cracks. Shoring-up the foundation would be expensive. He also said there were signs of settling in the living space, near a large opening between rooms and above that, near the master bedroom.

Groundwater is a good thing. It is important to human life that water is able to travel through the ground.

When ground water is high, and water sits against the foundation, that foundation is at risk for leaking. If my client’s house was in an area where there was high ground water, those cracks would be leaking.

The nightmare we aim to avoid is stories like this, where houses were built too close to high water tables and their concrete foundations could not withstand the water pressure. Link 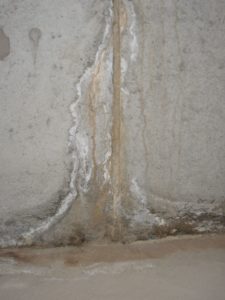 When the water table is high, there is an ongoing problem.  Large quantities of water build up, underground, near the foundation. Basement walls are not waterproof. Older buildings, with foundations of stone and mortar, or concrete block and mortar will leak if water rests outside the foundation. Water can move through mortar pretty easily, and can also get through concrete if there is enough pressure.  Even new foundations, which are built with gravel under them and water-barriers around them, will leak if there is enough water pushing against them. Concrete walls crack; water comes through the cracks; the cracks get bigger; more water comes in. Remember how heavy water is. Remember that water will go through the easiest path possible; sometimes that path is through concrete into a basement. Perimeter drains with sump pumps might solve the problem. But if the volume of water is extreme, pumps will not be able to keep up.

Some houses just should not be built. And if they are built, they should be extremely cautious to account for the water table.