Squirrels in the house

Squirrels in the house

It is baby squirrel season. Sometime this winter, squirrels find romance in attics and other indoor spaces. Babies start moving around in April or May.

So, if you are hearing squirrels now, likely you have a family of squatters. What to do?

Seriously, hire someone! We know a few good people in the Boston area.

It’s May, you can’t evict the parents now. The babies will die in your house, if you do. That is both cruel and smelly. A responsible squirrel hunter will tell you to wait for them to be big enough to go outside during the day, then evict the whole family.

Squirrel removal is pretty simple. The pest controllers install a one-way doors that let the squirrels leave, but makes it so they can’t come back. Once everyone is out, they seal up the entryways and repair any soft wood around the house trim. Squirrels chew pretty well, so sometimes you’ll see metal mesh used to deter them. In tough cases, they coat the wood with deterrent materials. I have heard that some use hot pepper and some use predator smells, like wolf or coyote urine.

We evicted a family of squirrels some years back. All that summer, there was a baby squirrel hanging around the house. They came really close to us (like they do on Boston Common). Sure enough, he and his mate (or she and her mate) moved in that fall and had a litter. Congratulations to them. Our squirrel controllers evicted them early the next summer. They, or one of their kids, moved in across the street the next year.

What do home inspectors look for?

During a house showing, I noticed that there was a mouse-trap in the attic floorboards and also a brown blob. I was concerned that the brown blob was scat* from a small mammal. (It was too big to be mouse dirt.*)

After some back-and-forth, these clients had their offer accepted and they hired a home inspector. I took some pictures when a home inspector was following the trail of a suspected raccoon. 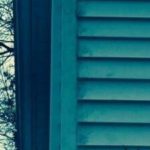 The inspection started outside. The inspector saw this. Do you know what those grey marks are from? Right. That’s a raccoon trail. A raccoon is going up to the roof. If you look closely at the photo on the right, you can see paw prints on the horizontal part of the siding. 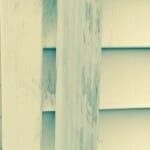 I didn’t mention the possible scat again until we got to the attic. The inspector informed us that raccoon scat looks like the unburned end of a cigar. (Inspectors know stuff like that). So did this. Eww. So, what is it? I pulled it out of its place to get a better look: 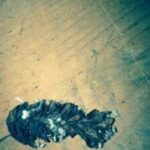 Then, the inspector looked for ways a raccoon can get into the attic. Nothing. No holes big enough for a squirrel, let alone a raccoon. Now we knew the raccoon was not nesting in the unfinished attic. Where was the raccoon going? 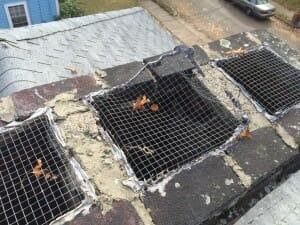 The chimney. The inspector climbed up there and took this picture for us. Those chimney screens must go. They can get covered with leaves and debris or a bird nest and block the heater and chimney flues. But look! the one in the middle has been pulled up. I’ll give you two guesses about who did that. It wasn’t the inspector. It was Rocky, the naughty raccoon.

*don’t you just love all the euphemisms for feces?