Women who leave the workforce

From March to June 2020, children were going to school via Zoom in most towns and cities in Massachusetts. Someone had to supervise children doing remote learning. Someone needed to be home, if the children were home. That someone was their mother, more often than not.

Women who worked essential jobs outside the house had to rely on extended family or friends networks or pay an adult to supervise the children. Women who were working remotely had to juggle their meeting needs with their children’s learning needs. Is it any wonder that 865,000 women left the work force in September 2020?

As of September 2021, schools are open, but the pandemic is not over. Working parents have the risk of both Covid-19 and the sudden need to quarantine because of exposures to it. By November, it was clear the Omicron variant was going to interfere with working parents. Again, the majority of parents affected were the women, who either left the work force or worked from home with sick or quarantined children in the house. This problem came to a head as students returned to school in January.

What happens to that 865,000 women who left the workforce? Women who are single and unemployed will not be able to get a mortgage until they can show the ability to pay a mortgage. If they already own, they will be relying on savings to make it through until the pandemic is over. For those who were in two-income family that is now a one-income family, their current mortgage, if they own, will be a much bigger bite out of the family income. (see the math below).

Were they to try to buy, the size of their mortgage has been reduced. Mortgages are regulated to require that the borrower be able to show their ability to repay. The decision to leave the workforce was not an easy one for those, nearly a million, women.

Women who were earning a moderate income were living even closer to the economic edge when they chose to quit their jobs.

This was a problem for women’s families before Covid

America’s economy changed, starting in the 1970s, when women entered the professional workforce in higher numbers. Some of this change was cultural; women were choosing to define themselves beyond the roles of wife and mother. But also, having a second professional salary gave two-income households an economic advantage.

Over the years, there was more surplus spending power in those families. That fueled inflation and increased demand for consumer goods and housing. That second income lost its status as a bonus. It became a near-necessity for a family to save for and purchase middle class housing. Single purchasers and single-income families were hard-pressed to keep up. 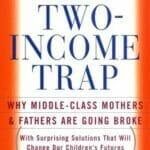 In The Two Income Trap (2003), Elizabeth Warren and Amelia Warren Tyagi explained how the economy shifted when women joined the professional workforce. It was clear that depending on the second full-time income was not feasible for working women. They would need to take time from work for maternity leave and for family sick time.

Women still bear the brunt of childcare, no matter how evolved we think we are. As we head into the third year of pandemic, the conflict between career and childcare is creating deep economic distress for middle-class households that used to have two full-time professional workers in 2019.

Advice from 2003 about relying on two incomes

In The Two Income Trap, Ms Warren and Ms Warren Tyagi wisely advise families to prepare for emergencies ahead of time. In 2003, Warren and Tyagi warned working women that getting a mortgage based on two, never interrupted, incomes was a financially risky decision. Normal breaks in income due to job changes, pregnancy and infancy, and sudden big expenses were risks in 2003.

In 2003, working poor families would fail “the financial fire drill” in large numbers. Now, thanks to Covid, more middle-class families would, too.

The “fire drill” means you should ask yourself three questions:

Rent or mortgage is usually the family’s biggest fixed cost. Would-be home buyers need to think about their fixed costs and how to prepare to pay them. Therefore, holding the mortgage payment to something you can handle is key.

The “front” ratio for a loan is your real estate monthly payment in relation to your gross adjusted income. A prudent limit is no more than 30 percent of your income that can be used for your housing expense. I advise my clients not to fudge it beyond that level. (Some lenders will let you go a few percentage points higher.)

Most of the time, my would-be clients are clueless about the weight of property taxes. They can borrow $700,000 for about $3000 in principal and interest. Fine. Property insurance is likely to be under $200 a month. Great. But taxes in that price range can get to be around $1000 or more a month, especially in the suburbs where there is more land on the parcel.

If that $200,000 gross adjusted income is split fairly evenly between two adults, the ability to pay the mortgage can be jeopardized by an extended maternity or (unpaid) sick leave, job loss of either party, or divorce. If one parent stops working, the family is paying $4200 a month, which is $50,400 a year out of the $100,000 remaining income. That is tight. Maybe it can be done, but for how long? (Warren and Tyagi, 2003 – example prices are mine.)

Since 2020, the additional threat to the two-income family has been Covid-related childcare. With an unknown end date, families are making hard decisions.

I remain in awe of working parents.