The Joy of a Client Community

The Joy of a Client Community

It is both joyful and humbling to be around our clients every year at our annual client appreciation party. The key to our success has been the large number of our clients who recommend us to their friends, family, and coworkers. It is confirming to me and my team that we really like our clients. They are fun people. I am grateful after every party!

Because many of our new clients come from our previous clients, many of our clients know one another from college or work or from life in town.  At every party, someone comes in and sees that other people in their lives also bought their houses with our assistance. It is fun to see those “You, too?” looks.

I opened 4 Buyers Real Estate in the spring of 2008. We’ve had annual client appreciation parties almost every year since then. The first year, we did a first-year anniversary party. Then we went to an annual Groundhog’s Day party.  In 2020, the party was before the Covid lockdown. In 2021, we had no party. So, in 2022 we decided to have our party in July. That way, we could be outdoors.

Our “Groundhog’s Day in July” party fell on Bastille Day. So, Viva la Groundhog! We had it at the same venue as our January 2020 Groundhog’s Day party, but had the patio as well as the party room. We had fairly good weather (some drizzle, but no thunderstorms). 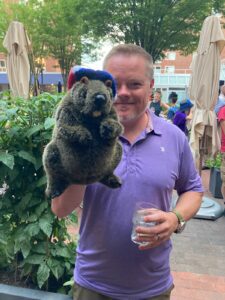 History: I went looking for a new winter holiday after one year of sending out December greeting cards. When is there a winter holiday that everyone can celebrate without leaving anyone out?

The legal holidays are not especially light-hearted – Martin Luther King, Jr Day, President’s Day. Valentine’s Day is too personal. The first day of spring is too late in the season; winter is over by then. So, what about…Groundhog’s Day?

I started sending out Groundhog’s Day cards in the second or third year that I was in the real estate business, probably February 1994. The first year I worked in real estate, I sent December cards. I care about inclusion, so it stressed me out.

Back then, in my head, I heard all these cautions and questions:

Don’t send a “Christmas card” to someone who is not a Christian. How can I be sure?

See the problem? Never give a task like that to someone like me to overthink during the dark time of the year! 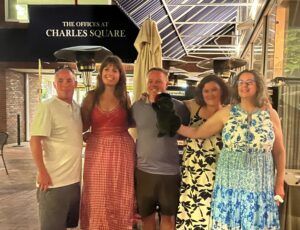 What do we do now about Groundhog Day? (Asking your advice!)

Should 4 Buyers Real Estate have an annual tradition of “Groundhog’s Day in July” or should we go back to Groundhog’s Day at the end of January or the first week in February, once it is safe to do so?

The advantage to February parties is that many people want an excuse to get out of the house in February. Winter parties are really fun. The disadvantage is that we had some stress around snow cancellation.

The advantage of a July party is that it can be outdoors. We didn’t need to watch the Covid infection levels, because it was an outdoor event. We can choose venues where we have indoor and outdoor space. Children can come more readily because it isn’t a school night.

Our team is conflicted about when to hold parties in the future. What do you think we should do?