Water Leaks: How to Ruin a House While Showering

Water Leaks: How to Ruin a House While Showering

Interior water damage: When water runs through interior walls, you cannot know what is going on behind the plaster in the wall until you open the wall. If the wallboard is all that got wet, the repair is simple. If the wiring is damaged, caa-ching.  If supporting wood members are damaged, more money. If there is a slow plumbing leak that has gotten moldy in there, double caa-ching. The extent of the economic hit varies wildly. In general, unless it is a tiny area, I hear the call of “run away!” [source]

Twice this summer, I saw the same type of neglect. It started with a leak at a shower wall on a top floor. In both instances, the seller had put plastic sheeting over the area where the tile had shifted. This does not solve the problem. A small amount of water was getting behind the plastic and the wall.

In both cases, the ceiling of a lower bathroom was wet and stained light brown. In one case, the water was also collecting behind the wall around the pipes in the finished basement.

How does this water damage happen? 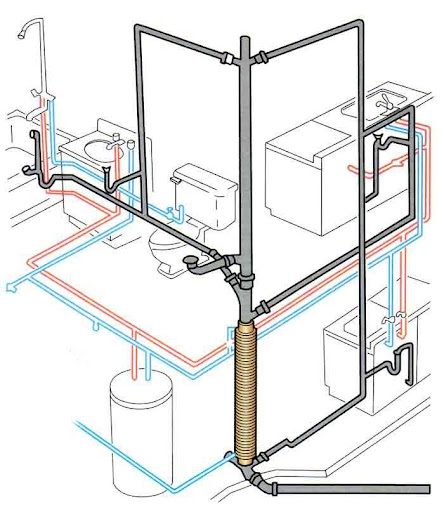 Rooms that need water supply are built along a shared set of pipes that go up from the basement to above the roof. That way, they can share the same water pipes and the same vent pipe. If you look at a house, you will notice that the bathroom and the kitchen sink tend to be near one another. Or the laundry room and a bathroom share a wall. Or two bathrooms are right next to one another. Bathrooms are generally built on top of one another in a multilevel house.

There are a number of ways that water can start dripping into the wall behind the shower. 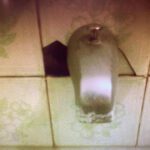 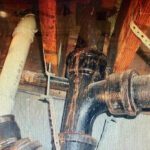 If water is dripping at the top of that stack of pipes, it goes down through the whole house. Water travels down along the path of least resistance. It can be along a wall. It can be along a pipe. It can drip from the wall to the pipe, or vice versa.

Along the pipes is a little better for the house. Along the wall can lead to wood rot and mold. In the case of these two houses, the first floor bathroom ceiling was a place where water took a horizontal turn and then had to drip through a ceiling to keep going down. Not only was there an active leak, but the bathroom ceiling needed to be replaced, once the leak was fixed.

Because you can’t know how much wood or plaster got wet, you won’t know what it will cost to repair the building. Fixing the leak at the top, by retiling the wall and maybe replacing the spigot on the bathtub faucet, is a manageable job. But rebuilding rotted wood studs within the wall is a level of messy we recommend you run away from.

There was an inspector I worked with early in my career. He used to say something like this:

“Relax. Breathe slowly… now, picture the Grand Canyon. Got it? Water made that. I am going to see if water is eating away at your house.”